While those at the top of the heap are getting richer than ever, millions upon millions of Americans are struggling more than ever before. As a general institution, jobs for the masses increasingly feature frozen wages, evaporating benefits, part-time hours, and less than stellar opportunities.

For these people, just getting by can be very stressful.

And that is being reflected in a big way in a recent Gallup poll that has captured unprecedented levels of concern among lower-income people who are statistically terrified of losing their grip.

via Wolf Richter of Wolf Street:

Lower-income Americans worry more in general than those with higher incomes. Everything is riskier and tougher for them. But nothing compares to the worries about hunger and homelessness. Gallup:

Since 2001, worry has been highest among those residing in lower-income households, likely because those with limited financial resources are more at risk of going hungry or becoming homeless. A consistent majority of lower-income adults worried about the problem before 2012, but that has only increased in the past five years.

Turns out, among Americans making $30,000 or less a year, 67% worry “a great deal” about hunger and homelessness! Food and shelter, two of the most basic human needs. That’s the highest percentage ever in Gallup’s data series on this question going back to 2001.

The unknown here is why those who are making less than $30,000 per year are so much MORE worried about hunger, homelessness and ‘just the basics’ than they were fifteen years ago.

Moreover, why are the middle-class people – making a healthy $30k-$75k also more worried than they have been about personally being homeless and hungry? 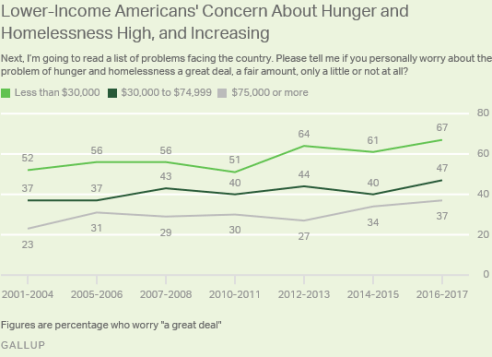 Though it is hard to pinpoint, there has been a squeeze on the economy. Somewhere out there, there is a monster.

The glut of money created to give the banks liquidity was reinvested back into government bonds, and companies’ own stocks. Investment did not, generally, trickle down to the working man. Jobs weren’t created, and a recovery never happened. And many people are on the brink of losing everything – obviously many of those making at or under $30,000 are finding it pretty difficult to make it through.

The disillusionment hasn’t helped. Even with an expanded SNAP government food aid program, people are more freaked out than they ever have been about how food is going to be put on their table, and about how they are going to keep a roof over their head.

The level of worry here is frightening enough in of itself.

As Wolf Richter asked, is there some particular reason why things have suddenly “gotten a lot riskier, scarier, and uglier in some profound ways for lower-income Americans, those making $30,000 or less a year?”